Artistic Advisor and Mistress of Ceremonies 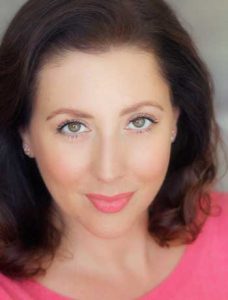 Praised by Opera News for her “shimmering tones”, Jamie Chamberlin enjoys a diverse career as a soprano, producing artist, and sought-after interpreter of new works; notably, as Marilyn Monroe in the US Premiere of Gavin Bryars’ jazz-noir opera, Marilyn Forever at Long Beach Opera. Career highlights include the title role in Lucia di Lammermoor, Cunegonde in Candide, Lucy in The Telephone, and Hazel George in the US Premiere of The Perfect American by Philip Glass. In late 2020, Jamie debuted the role of Fiordiligi in the world premiere of COVID Fan Tutte with Pacific Opera Project: a drive-in production of Mozart’s treasured opera, with a new English libretto by Josh Shaw to reflect current times.

In collaborations with composer and rock legend Stewart Copeland (The Police), Jamie is celebrated for her “superhuman soprano”(Schmopera) in The Invention of Morel (Faustine), and Satan’s Fall (Raphaella); both premiered alongside husband, tenor Nathan Granner. The couple are co-creators and stars of Sing Out Loud! for LA Opera Connects, a vibrant web-series produced entirely from their home during the Global Pandemic.

A force in Southern California’s new music scene from the very start, Ms. Chamberlin made her professional debut with the Los Angeles Philharmonic, singing the soprano solo in the World Premiere of Esa-Pekka Salonenʼs Wing on Wing during the inaugural season of the Walt Disney Concert Hall. Ms. Chamberlin created the powerhouse role of Elyn Saks in the World Premiere of Kenneth Wellsʼ The Center Cannot Hold (based on Saksʼ Pulitzer Prize winning memoir of the same title, chronicling her battle and victory over schizophrenia) at UCLA’s Center for Health Services and Society.

Chamberlin’s varied career includes her solo debut with LA Opera as the Cretan Woman in Idomeneo alongside opera legend Placido Domingo, and appearances with Chicago Opera Theatre, SF Opera, and The Pasadena Symphony and Pops under the baton of Michael Feinstein. Jamie is a Delos Recording Artist (Terrain of the Heart and Home is a Harbor), and her recognizable voice can be heard during the epic water ballet scene in the 2016 Coen Brothers film Hail, Caesar!

A respected and emerging figure in Arts Education, Jamie recently completed an Artist in Residency at Manchester University where she sang in the world premiere of Dominique Le Gendre’s orchestrated song cycle, Songs of the Islands.  Jamie earned her BA and MM from UCLA’s Herb Alpert School of Music, where she currently serves as Lecturer in Vocal Technique.